"Downland" was a platformer originally released in 1983 on a ROM cartridge for the TRS-80 Color Computer series.  The game was released by Spectral Associates and licensed by Tandy, but written in assembly language by Michael Aichlmayr.

In "Downland", originally to be titled, "Cavern Climber", you play as a very Mario looking individual navigating through various cavern chambers in search of treasure and keys while climbing ropes, dodging drops of acid, boulders and some other hazards. When you pick up a key it will unlock new exits and occasionally those exits are located in a chamber you are not currently in.  You were given a timer at the start of each chamber.  If that timer ran to zero a very fast flying bat would appear to ruin your day, and most times it does!  The nice thing is that once you leave a chamber that chamber's timer slowly counts back up.  There are some puzzle elements to the game, but for the most part it is just straight forward. This game was one of my favorites as a child! 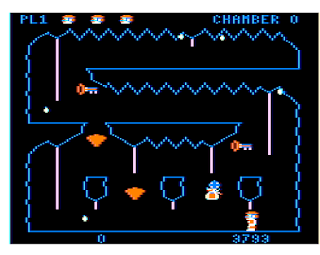 As a child I dreamed big of cool video games I could make for the Color Computer series, but my skills were limited to the BASIC programming language.  The Color Computers, CoCo from here on out, BASIC language was intertwined with its operating system and was VERY easy to use.  Unfortunately this particular BASIC used an interpreter to decipher and execute the code.  This was extremely slow.  Some BASIC's allowed the programmer to compile the code and then an executable would be made from there, which was much faster.  There's more information about how those 2 different approaches work on the deep-web! The bottom line is if you want to make a fast game using graphics and sound on a CoCo you better learn 6809 assembly language!

Once I became a teenager my interests shifted elsewhere so the CoCo became a thing of the past for me.  I never went beyond the BASIC programming language on the CoCo.  In my early 20's I started programming again, but used PC based languages and interfaces.  Video game development was a hobby and I made many programs.  Some were great others were not so great.

In my late 20's I stumbled upon a Color Computer 3 emulator and I started living my childhood all over again!  It wasn't until about 2-3 years ago (2015 into 2016) that my now close friend, Simon Jonassen, reached out to me and offered to teach me 6809 assembly.  I was super stoked as you can imagine because it was the vehicle by which I could finally make my dreams a reality.  As it turns out too the CoCo community is still extremely strong!  So I won't be the only one to enjoy the fruits of my labor.


Downland 2 is a video game I began development on a short time ago after my first assembly language release, "Timberman" for the CoCo 3.  It was a clone of the popular phone app game of the same name.  Downland 2 will be everything I imagined as playing the original "Downland" as a kid.  Full 16 color caverns that are larger than the originals.  There will be boulders, acid drops and the bat as in the classic, but I intend to add some other features as well to make the game a tad more interesting and fun.  In my next blog I will go over the toolset our team uses to develop modern-like games on a vintage system.  Once the toolset is established I will continue blogging the details of applying the those applications to the development of a game.

Thanks for reading and I hope these blogs will be informative!
Posted by PaulyT81 at 2:29 PM

PaulyT81
Just a middle aged dude trying to have fun!